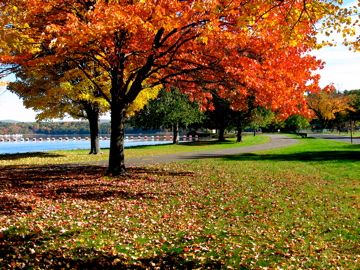 Basically Bicycles is located near the Canalside Rail Trail in Turners Falls. This beautiful bike path is nearly four miles long, winds along the power canal in this former mill town, and features dramatic views of the Connecticut River from a car-free metal truss bridge. In 2010, Yankee Magazine named the Canalside Trail the Best Urban Bike Path in New England.

The path starts on First Street, near Unity Park, just 2.5 blocks from Basically Bicycles and the many amenities in Turners Falls. Bicyclists will enjoy the trip along the water, where swans, ducks, geese, eagles and other birds are often seen. The path does cross Montague City Road and uses a small amount of shared roadway on its way to the railroad depot in Deerfield. Although the ride is near quiet neighborhoods and Montague's downtown, ample trees and sounds of nature make it seem farther from town. Be sure to stop on the metal trestle bridge to enjoy the views of the Connecticut River. This bridge itself is remarkable, in that one of its three spans was originally constructed in 1880 and is the oldest span across the Connecticut River, and remained in place when the rest of the bridge was damaged in the hurricane of 1936. 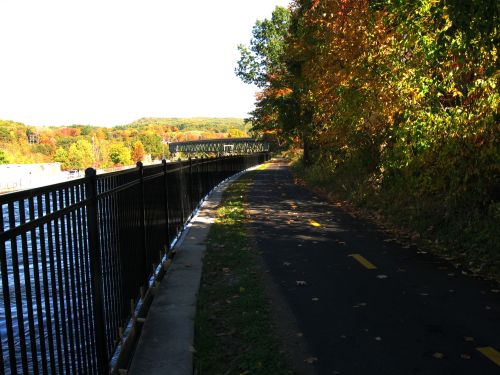 Folks who want a bit longer ride can also take the two-mile spur on the northwest side of the canal to ride down to the United States Geological Survey's Conte Anadromous Fish Laboratory. For this option, take the 11th Street Bridge to the section of Turners Falls known as "The Patch," and take the very first left after the bridge, which is an access road along the canal. You'll join other cyclists, rollerbladers, and walkers enjoying the view and the quiet.

You can pick up a free map of the Turners Falls Canalside Trail bicycle path and all the bike routes in Franklin County at Basically Bicycles, 88 3rd Street. 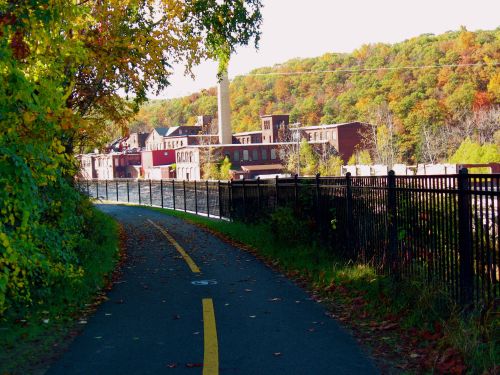 Use this link to download a map of Canalside Trail in downtown Turners Falls.

Parking for trail users is available at Unity Park in Turners Falls, near the Discovery Center, at the end of Masonic Avenue in Turners Falls (mid-trail), and at the Deerfield end of the path, just off McClelland Farm Road. Turners Falls has lots to offer. Enjoy your visit!